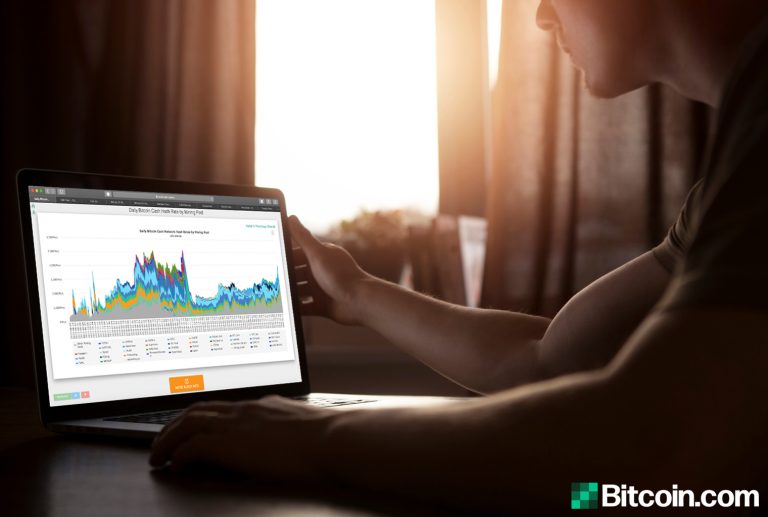 While people have watched the BTC network surpass 100 exahash per second (EH/s), Bitcoin Cash (BCH) has been steadily gathering hashrate as well. Since the November 15, 2018 blockchain split, which produced the Bitcoin SV (BSV) chain, BCH hashrate has jumped by more than 3x. Bitcoin cash is often more profitable to mine than BTC and during the last seven days, the BCH hashrate has averaged around 4EH/s.

It’s been well over a year since BSV split off from the BCH network during the mid-November 2018 hash war. After a week or so, both chains saw hashrates drop below 1EH/s and there was a period of significant profitability changes between BTC and BCH miners. Since then, BCH miners have picked up the pace and are hashing far more than they did following the hash war aftermath.

On November 15, just before the split, there was more than 5EH/s hashing away at the BCH chain, but that plummeted to its lowest point on December 17, 2018. Today, according to multiple hashrate recording websites, the BCH hashrate spiked over 8EH/s three hours ago, as recorded by fork.lol. The Bitcoin Cash network’s average during the last week has been around 4EH/s. This means that from mid-December until now, BCH has seen a hashrate increase of more than three times the daily average.

In fact, all three SHA256 networks have seen a hashrate rise since mid-December 2018. The BTC hashrate expanded from 32EH/s to this week’s 110EH/s average. Bitcoin SV (BSV) has also seen its network hashrate swell, as it jumped from 1EH/s to 3.3EH/s on January 21, 2020. Coin Dance also shows that BCH has been more profitable to mine in contrast to BTC for more than half of 2019.

As the BCH network has seen a significant increase in hashrate, a large number of stealth miners have been hashing away at the network. News.Bitcoin.com reported on the topic in December 2019 and the trend has remained consistent. During the last week, BCH has had 49% of the network being hashed by unknown mining entities. In the last 24 hours, unknown miners captured roughly 57% of the network hashrate.

Since we published that mining report, a mining operation called Taal has appeared on the Bitcoin Cash network. On January 10, a stealth miner who at one time signed BCH block coinbases as “fezi3*,” changed the block signature to “taal.com/fezi3*.” Taal is associated with Calvin Ayre’s Squire Mining Inc. rebrand and BSV backers Craig Wright and Jimmy Nguyen are advisors for Taal. The name Taal is also the name of a volcano that just erupted near one of Ayre’s island villas. Just prior to advertising onchain that it was mining BCH, Taal implemented a concept called Miner ID.

All Three Networks Will See a Reward Halving This Spring

Alongside Taal, which captures 2% of BCH blocks today, there are nine other identified BCH pools mining the network. This includes Bitcoin.com, Prohashing, Okex, Huobi, Btc.com, Viabtc, Poolin, Antpool, and Btc.top. Seven of the known BCH mining pools today also mine the BTC chain. There are four BCH miners that mine the BSV chain and two of them mine on the BTC network. No one knows exactly why there’s a lot of stealth miners mining the BCH chain or why there’s been such a shift in mining pools. It’s anyone’s guess as to why BSV miners are mining the BCH chain as well and only the pool operators themselves know the moves they are making.

In the last three days, unknown miners from BTC have dipped to around 3% of the network, but a few weeks prior, BTC had more than 20%. BSV’s hashrate also has a high concentration of stealth miners hashing away at the chain. At press time there’s around 55% of unknown hash processing the BSV chain during the last 24 hours. Despite the uncertainty of why pool operators are stealth mining and the shift in hashrate on all three networks, a number of speculators believe the changes are due to the upcoming halvings. All three SHA256 networks will see a block subsidy reward halving in the spring of 2020 and miners may be steadily preparing for this event.

Do you want to maximize your Bitcoin Mining potential? Plug your own hardware into the world’s most profitable Bitcoin mining pool or get started without having to own hardware through one of our competitive Bitcoin cloud mining contracts.